The Archer Instruments GLD30 Gas Leak Detector is a fixed-installation ambient air monitor, designed to continuously sense the atmosphere for the presence of leaking gas. This device is used to alert operators and plant personnel in the event of Chlorine gas, Sulfur Dioxide gas, or other gaseous chemical leaks. The relay and output features of the GLD30 allow for a variety of automated reactions to chemical leaks. 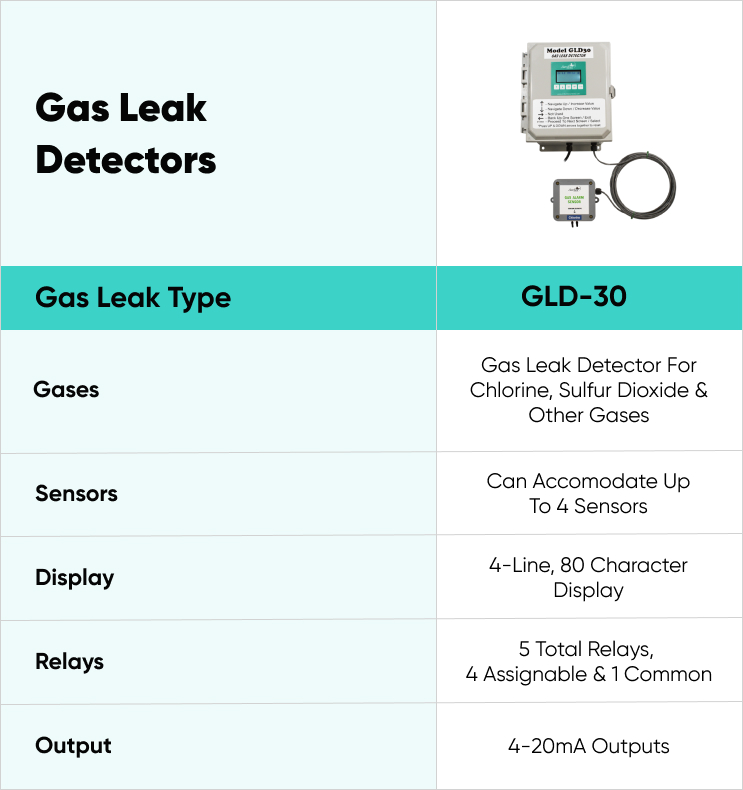 The Archer Instruments GLD30 Gas Leak Detector is a fixed-installation ambient air monitor, designed to continuously sense the atmosphere for the presence of leaking gas. This device is used to alert operators and plant personnel in the event of Chlorine gas, Sulfur Dioxide gas, or other gaseous chemical leaks. With an Archer Instruments chlorine gas sensor installed near your chlorine cylinders and a properly integrated GLD30 controller, operators and other plant personnel can be assured of automatic notification in the event of a chemical leak. The GLD30 electronic controller is designed to integrate easily with cylinder valve closure systems.

The GLD30 Gas Leak Detector is comprised of a NEMA4X electronic controller and separately mounted sensor(s). Each GLD30 controller is capable of monitoring up to 4 sensors. These sensors can be for the same or different gases (any combination). The most common applications include chlorine gas sensors for use with gas chlorination systems and sulfur dioxide gas sensors for use in dechlorination systems. Each sensor can be mounted up to one thousand feet from the controller. The connection between each sensor and the controller is accomplished by a shielded two-conductor signal cable.

The GLD30 Gas Leak Detector can be powered by either 120 VAC, 240 VAC or 24 VDC. The user interface consists of a large four-line by 20-character backlit alphanumeric display (eighty total characters) and a five pushbutton control interface consisting of four navigation & adjustment pushbuttons as well as an “enter” pushbutton. This combination of a large display showing full English words and the intuitive pushbutton interface combine to make the GLD30 extremely simple to program, configure and operate.

The GLD30 Gas Leak Detector provides audible and visual alarm indications, as well as five independent alarm relays, each being double throw for either normally open or normally closed functioning. Four relays are independently assignable for any programmed alarm condition. The fifth relay is a common relay, which will trip on any alarm condition. The GLD30 also includes four user-assignable relays, each of which can be assigned to any programmed alarm. A total of four independently assignable 4-20mA analog outputs & MODBUS output are also included (all standard). The GLD30 incorporates an integral 90-decibel horn to alert nearby personnel of an alarm condition and is available with an optional internal battery for continuous operation during periods of power loss.

The GLD30 software control program offers the user a variety of features and adjustable settings. Each sensor can be programmed with either one or two separate alarms. Each alarm can be set to a desired alarm trip level and alarm delay. Each sensor can be easily calibrated through the pushbutton user interface at both the zero point and at a determined span calibration point. The software program incorporates a diagnostics menu in which the user can see the raw signal present for each sensor in use, as well as the operating status related to the power supply and common alarm relay conditions. The diagnostics menu also provides the user with the ability to test both the horn and all relays via the pushbutton user interface.

The GLD30 Gas Leak Detector is a flexible, user-friendly, and reliable instrument for continuous gas leak detection. The GLD30 is installed in dozens of countries around the globe.

Will you join us? Distributor opportunities are available.
Please contact us to learn more.

Archer Instruments is an original equipment manufacturer, located in Catasauqua, PA (USA). It is our ongoing goal to manufacture the most reliable line of gas chlorinators in the world.